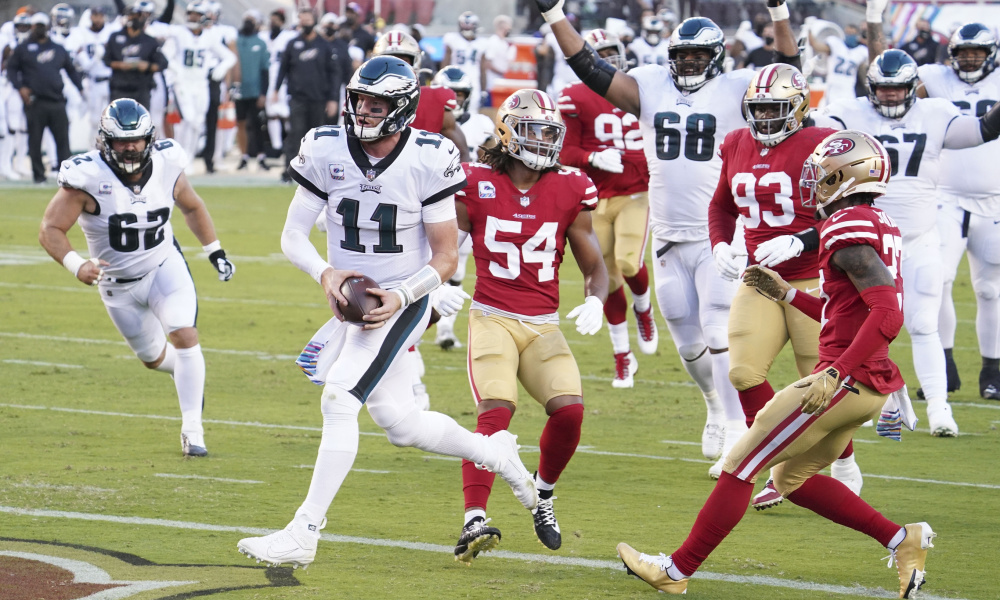 The Eagles have been off to a horrible start to say the least. They started off the season with a surprising loss to the Washington Football Team, followed that up with a loss to the Rams, and then ended up tying with the Bengals. This was arguably the easiest portion of the Eagles’ schedule this season. Philly is coming off a week 4 upset of the 49ers, but we still had our flaws. Let’s take a deeper dive into what’s been going wrong for the Eagles thus far.

Wentz has been the most disappointing QB in the NFL this season. He has a 45.1 QBR which is 29th worst in the NFL and 7 interceptions. Carson had 7 interceptions in total last season. Wentz has also thrown for just 930 yards this season which ranks him 20th in the league; names such as Justin Herbert, Dwayne Haskins, Ryan Fitzpatrick, and Joe Burrow have thrown for more yards, and that’s unacceptable for a player of Wentz’s caliber. You could argue that Wentz has been playing behind a banged up offensive line and his receivers have been going down life flies, but that just doesn’t justify misreads, bad throws, and bad decision making.

Though Wentz has been bad, the game planning on both sides of the ball hasn’t been great either. At one point, Doug kept calling for the deep ball even though it wasn’t working most of the time. He also failed to adjust to Carson’s needs; it is obvious that the Eagles have a bad offensive line, yet he did not call plays in which Carson could get the ball out quicker. Jim Schwartz has been atrocious with his defense this season. He has failed to adjust to quick offenses. Haskins did very well and got his first win against us, the Eagles defense could not stop Cooper Kupp in week 2, and Joe Burrow threw for 312 yards against Philly with a 70.5% completion percentage and a rating of 105.5, his highest of this season. Schwartz simply has to be better with the talent he’s been given.

This is the one area of the defense where Schwartz should get no blame whatsoever. He hasn’t been given any talent at the linebacker position. TJ Edwards has done a decent job, but that’s it. Nathan Gerry has just hurt the defense up to this point. His inability to guard tight ends is a major liability which has allowed opposing offenses to put points on the board. His play has been inexcusable, and if he wants to keep his starting role, Gerry has to step it up and prove himself.

Those are the most notable causes to Philly’s rough start. Now, it could be early to say that the Eagles may have turned it around, but it seemed like we carried some momentum from the end of the Bengals game into the Niners game (this game resulting in a win). If they have turned it around, let’s look at what factored into this.

Carson Wentz has been bad this season, but he had his fair share of good moments against the Bengals and Niners. For starters, he used his legs more. This is something we haven’t seen since Carson suffered that ACL tear in 2017. It felt good to see him run out of the pocket. He also did it against the Niners, and ran well. Carson Wentz has run for 10 first downs in the last 2 games, an incredible stat. Wentz also did a very good job throwing the ball. He threw for 1 touchdown against the Niners, and it was a 49 yard bomb to Travis Fulgham; Wentz couldn’t have placed the ball any better. He also did a much better job scanning the whole field and making the best throw compared to the first three games of the season. When Wentz plays well, the offense comes together as a whole.

Doug Pederson and Jim Schwartz did a great job correcting their mistakes against the 49ers. Doug called for quicker passes, and this really benefitted Carson. The offense was able to go down the field quickly with ease. He also designed plays that had Carson running the ball more. This kept the defense honest. Doug has also done a great job incorporating Jalen Hurts into the offense to keep the defense on their heals. Schwartz seemed to fix his gameplanning against the Niners as well. He played more zone coverage which allowed less longer completions for the offense. Despite not being able to contain George Kittle (no one can), Schwartz was able to stop the other Niners receivers from having big gains.

The Eagles defensive line has certainly been a bright spot for them this season, as it should be. They are ranked #2 in sackes per game (4.2) and are ranked #1 in highest pressure grades (85). The D-line has done an amazing job making the quarterback feel uncomfortable and stopping the run. They have provided a lot of energy for the team as a whole.

These were some of the most eye-catching causes as to why the Eagles had such a rough start and how they may have turned it around. Let’s hope they capitilize on this momentum and make a run.