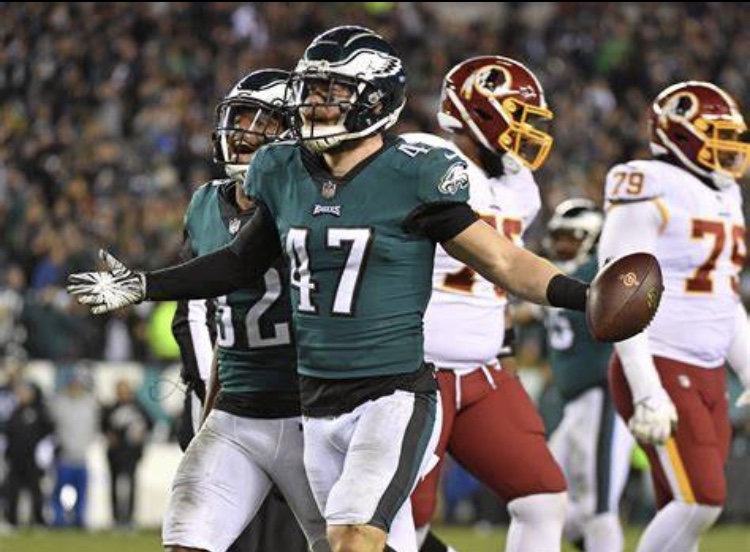 Eagles drafted Mills out of LSU in the 7th-round of the 2016 NFL Draft. He played a lot of safety at college and some cornerback. He started his NFL career as a corner and has been up and down. Has had some really good games, and some really bad games. Eagles re-signed Jalen Mills to a one-year deal this past offseason and will spend his fifth NFL season as the team’s starting safety to replace Malcolm Jenkins. This could turn out a lot better then people think. Jalen Mills should have been playing safety a long time ago. His strengths would make him a lot better safety than corner. First he is solid in zone coverage. One on one vs some of the quickest route runners in the game in press man was not his play style. Another strength by Mills is he is a very good run defender. He has easily been the Eagles best tackling cornerback since he joined the Eagles in 2016. Jalen Mills played one game at safety in his career and it was this past 2019 season and he played really well. He was playing the run really well and was taking a lot of Brady’s check-down options out of the way. Brady struggled throughout the game and Mills played a big role in that. He could end up being a very good starting safety in the NFL

JJ Arcega-Whiteside was one of two of the Eagles’ second round pick in 2019 (the other being star RB Miles Sanders). To put it short, his rookie year was a disaster. Sometimes did not know the routes, could never get separation, and had bricks for hands. He dropped a potential game-winning touchdown Week 3 against the Lions on a beautiful 4th down play by Carson Wentz. He finished his rookie year with just 10 catches 169 yards and 1 touchdown. Not much to like from his rookie season. It was tough year despite being given the opportunity to step up with the Eagles’ entire roster basically being hurt. A lot of reports out of camp are saying JJ has been a completely different player. He is healthier, stronger, faster, catching more passes, playing smarter, and developing good chemistry with Carson Wentz. Eagles will start the season with multiple injuries at the Wide Receiver position, JJ Arcega-Whiteside has a great opportunity early in 2020 to show he can have a breakout season.

The Eagles’ LB group on paper looks like a disaster. But, people don’t know the name Nate Gerry. He was drafted in the fifth round back in 2017 out of Wisconsin as a safety. Eagles moved him to Linebacker and he has slowly developed into a solid Linebacker, and is poised to have a breakout season. Being a former safety, Gerry has very good coverage ability for a Linebacker, he can keep up with receivers and running backs, even tight ends. He also has showed great playmaking ability, with 3 career interceptions with only 1 year of being a starter. This past season where he finally got chances to start, he finished with 72 tackles, 2.5 sacks, and 2 interceptions, one ran back for a touchdown. He also had 5 pass deflections. Eagles started the year with their linebackers being Zach Brown and Nigel Bradham. Brown was released after Week 6 and Gerry started since. He had himself a solid year and will look to improve upon that in 2020. He has the coverage ability to be one of the better coverage linebackers in the league. The first 3 years he was learning the position. Gerry was a lot of potential and especially in a contract season, Gerry could be in for a huge breakout season and earn a new contract extension to keep as the Eagles’ starting Linebacker for the foreseeable future.