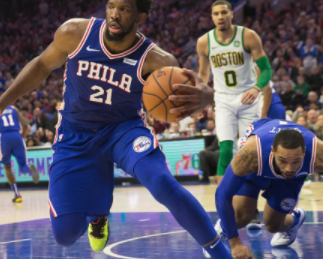 The Philadelphia 76ers are set to face the Boston Celtics tonight in Game 1 of a best of seven series. The 76ers are entering the series as the sixth seed in the East, versus the Celtics who hold the third seed. This year has been extremely disappointing for a 76ers team that had aspirations of claiming the number one seed, and moving on past the second round for the first time in the Brett Brown era. Yet, this isn’t the case. After sub-optimal performances from basically all 76ers players, especially including major off-season acquisitions Al Horford.

From championship hopes, to hope that you can win one series in the playoffs, clearly shows how flat this team came this year. Of course, entering another battle with the Boston Celtics is going to be hard enough, but the 76ers will also be without star Ben Simmons who suffered an injury during the remainder of the regular-season games. So the team who has been mediocre all season is going to be entering the playoffs without its second player, and you wonder why the fanbase’s mood is down.

This year’s playoffs have a different feel for the 76ers. No, it’s not just because they are in a bubble playing in Orlando, it feels like an end of an era. Brett Brown has been the coach of the 76ers for the past seven years. The team has not made it passed the second round of the playoffs, and have only made the playoffs a total of three years (including this one). Brown’s position was in the hot seat after another let down as the 76ers were knocked out of the playoffs by the Toronto Raptors. Brett Brown was given another chance with the 76ers this season, with some new weapons in Al Horford, and Josh Richardson. The 76ers had a returning big three of Joel Embiid, Ben Simmons, and Tobias Harris.

The mood at the beginning of the season was through the roof. Although, as I mentioned injuries, lack of development, inconsistency, and poor play riddled the 76ers this entire year. Since returning to play in Orlando, those issues weren’t resolved. Ben Simmons is injured, Joel Embiid is playing his yearly will-he-or-won’t-he-play, and the rest of the team isn’t able to rise to the next level needed to win playoff series. Brett Brown’s job is on the line, if the 76ers lose in the first round it will almost be automatic, but Brown could once again fight to see another season if the team makes a run. They won’t.

As fans, it would be unfair to bait yourself into believing that this team is going to “do the unthinkable”. Now the next step once the 76ers do the inevitable and fire Brett Brown, they will be faced with the structural change. Ben Simmons and Joel Embiid. The two titans of the game were supposed to bring title(s). Both the brain-children of former 76ers GM Sam Hinkie. It’s a decision that is coming for the 76ers. Of course Brett Brown will be the last-ditch to save the idea that the 76ers can work with an injury-prone center and a shotless point guard/power forward. The 76ers will try to do their best Phillies impersonation by changing coaches but not removing the root cause. Although, that’s an article for another day.

In the meantime, the 76ers will try to out-run the Boston Celtics as they can see the sun setting on the hope and future of the team. But, hey the Flyers won yesterday, so…