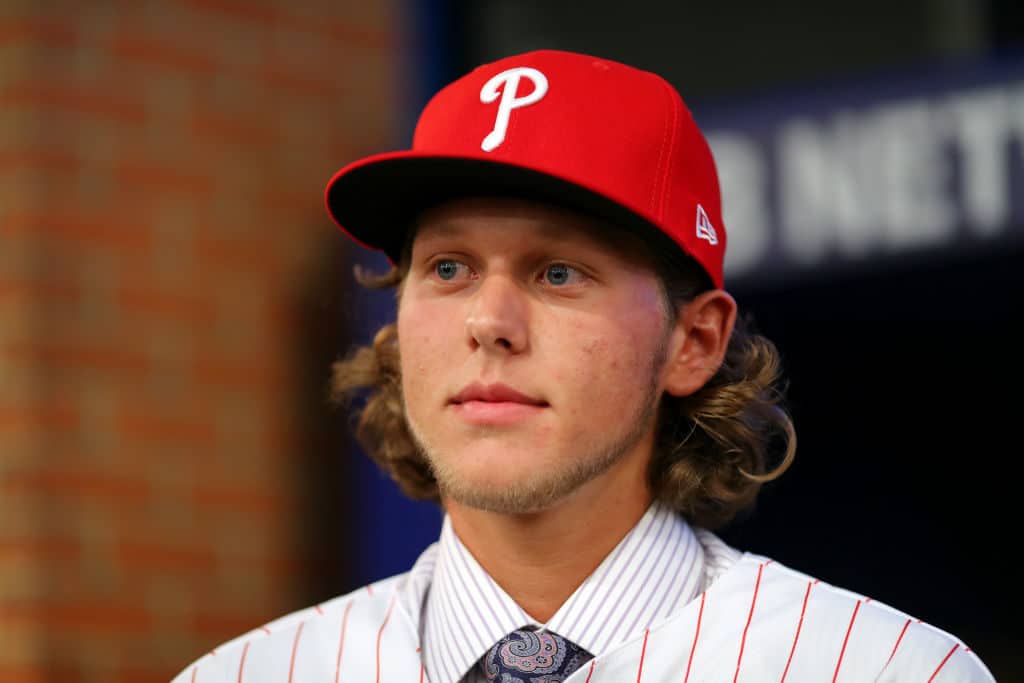 After hearing the news that Major League Baseball is striving for a July 1st opening day and 80 game season, baseball fans worldwide rejoice knowing that the best players in the world may soon be taking the field once again. Major League Baseball and the players union seemed to have agreed to expand rosters slightly for the upcoming year. An easily agreed upon decision since pitchers will have to restart threes throwing program in the reported 2-3 week spring training to start around mid June. Injuries as always are sure to happen, but without allowing clubs to expand rosters it would hamstring organizations on there options during games. So now each club has to make a choice. The definitive number of added bench spots isn’t set in stone yet, but for arguments sake we will go with three for right now. The Phillies will have a number of minor league players to choose from. Players with Major League time will be excluded from this list even if they are signed on under a minor league contract. So question is, who’s got the best shot?

The 23 year old right hander from the Dominican Republic was signed as an international free agent by the Phillies back in 2004. He’s got a good repertoire of pitches and is probably more suited for the bullpen long term. That is most likely where you will see Medina if he makes his big league debut during the shortened campaign. With only a handful of locked spots in the Phillie’s pen, Medina could very easily could insert himself into a bullpen role. He climbed as high as AA in 2019 with average results, but flashes of very solid pitching. Though he isn’t the sexiest of picks among the Phillies prospects, he slots in at number 3 on this list. No fancy reason other than he’s got the most upside and experience to fill in should his talents be necessary.

How exactly is the Phillies top prospect not considered the most likely to be called to the show this year? It’s simple, the lineup is set. With the return of Andrew McCutchen from his knee injury and the bench players currently signed he just won’t have a place to play regularly. Why is he still on the list? Because he’s one of the top prospects in the game. Bohm made his way to AA last year and didn’t disappoint. A slash line of .305/.378/.518 with 21 HR’s and 80 RBI’s, be established himself as arguably the best third base prospect in the minors. He’s got pretty solid discipline at the plate too. Bohm walked 57 times compared to his 73 strikeouts. Which for a power hitter is well above the league average. His long term outlook for in a Phillies uniform is extremely promising. He’s got the talent and clear path to the starting third base gig for years to come. But he isn’t the one most likely considered to be brought up to make his presence felt during this proposed 80 game season.

He’s number 2 on the prospect list, but Spencer Howard has gotta be considered number 1 here. After Nola and Wheeler, the next 3 spots in the rotation are big fat question marks. Sure we all hope Jake Arrieta can start least become a reliable middle of the rotation arm. Maybe Zach Eflin looks more like the first half of 2019 then he does the second half. Perhaps we get lucky and someone like a Nick Pivetta and his “stuff” can finally emerge as a viable long term option. No one is holding there breath with those options. Not to mention with pitchers having to revamp there throwing programs back up again for the start of year, we may see an injury or 7 pop up. The Phillies clearly are thinnest in the rotation, not only with talent, but depth as well. Howard fills both of those voids if his services are rendered as needed. Through 4 different stops reaching as high as AA throughout 2019, Howard showed why he quickly has risen as one of the top right handed prospects in the game. 15 starts with a cumulative 2.03 ERA, striking out 94 batters in 71 innings. His 16 walks and 43 hits allowed helped him to achieve a phenomenal 0.831 whip during the 2019 season. He’s got the upside to be a front end starter, and in a shortened season his original innings limit show no longer be an issue. Not only should he make his debut this season, he may end up forcing manager Joe Girardi’s hand to insert him into the rotation on July 1st. Adding him to Nola and Wheeler could make for a formidable rotation for the foreseeable Phillies future.

It’s not clear if all or any of these 3 individuals will make it to the show during this unprecedented league year. So many questions till remain on what the league and union will agree upon to start the year. Once the dust settles and the first pitch is throw we all have a lot to look forward to. For our sake as fans, we would all like to see the club we currently have constructed succeed, but we all know bad things happen. Hopefully when they do, these young guns can step up and show they are ready to become the next big thing.