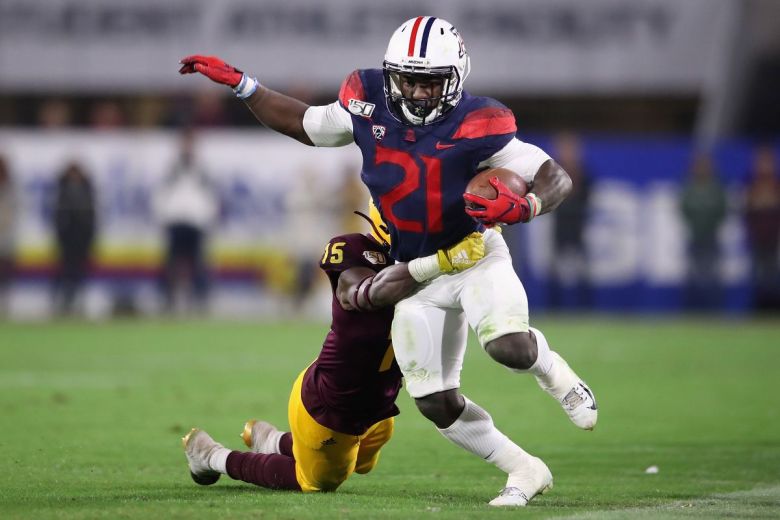 While nowhere near the biggest issue that the Eagles should be addressing, it is still a good idea to stock up on runningbacks through the draft. This does not need to be through the first half of the draft, as plenty of quality backs fall to the end of the draft or do not even get drafted at all. J,J. Taylor, the talented Arizona tailback, is probably going to be one such player.

J.J. Taylor comes in at 5’5 and 185, making him tied for the shortest player in NFL history once he is on a team. The first thing you will notice when watching Taylor, other than his height, is his insane agility and quickness. The man has lightning quick feet and an ability to make defenders look silly in space with his moves. Overall, he has good vision and a nice ability to get what’s blocked for him with the potential for more with his elusivity. As a receiver, he brings a lot of value to the table. He’s a natural catcher even with his smaller frame, and good things happen when he gets in space. Do not let his size influence you, he is an incredibly tough player who fights for extra yards and can add a lot on special teams.

Even though Boston Scott is currently on the roster, and provides a similar role, I see no reason for not adding J.J. to the roster if he slips out of the draft. I think J.J. has the potential to be a better player in the NFL than Boston Scott. If J.J. Taylor is made apart of the Eagles, then expect him to be a very good special teams player who contributes as a receiving back out of the backfield.