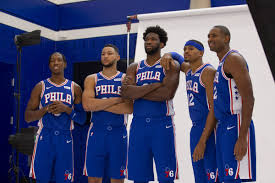 It’s pretty clear that the Philadelphia 76ers are guaranteed to make the playoffs. But what isn’t guaranteed, is the 9-man rotation Brett Brown wants to use in the playoffs this year. Here is my prediction for the lineup the Sixers should use, and who is in contention for these spots.

This is one of many obvious choices on this list. I mean, he is possibly a top 5 point guard in this league in my opinion. He is also in the running for Defensive Player of the Year, and in my opinion, is the Sixers’ most valuable player. So this is a no brainer.

Another no brainer here. In my opinion he is clearly the best shooting guard on this roster. He is a good 3-and-D player, and he has his moments where he can take over the game. I think he can also play backup point guard minutes, as the Sixers could use one if Ben Simmons doesn’t perform up to par.

I know, I know. Why should a rookie who only started 11 games start in the playoffs? Well, in those 11 games, the Sixers are 8-3 when “Mathief” starts. Also, with him and Simmons on the court together, they can switch onto anyone and stop some of the better dynamic duos in this league.

Back to the no brainers. Tobias, in my opinion, cannot lead the team to success, nor is he consistent. But, he is the third best player on this team and is a nice option if everything goes wrong.

Embiid is the best player, not most valuable, on this team, and he is the best center in the league. He can dominate both on offense and defense. He can take over the game whether or not Simmons is playing well. I just hope he and Simmons can figure out how to work together.

I think Horford is meant to be the backup center on this team. With Embiid and Simmons clearly not going to the bench, Horford does not fit with them at all. Since he is not shooting well this season, he should play center and focus on playing in the paint.

Although Shake has been starting a lot recently due to injuries, he is meant to be on the bench as a pure scorer. He has recently been playing out of his mind, and hopefully he can do that as a main option off the bench.

Another nice scoring option off the bench, but Korkmaz is very inconsistent. He has been playing decent recently, but I feel that he is the type of player to perform well for one series then disappear.

Now this does not mean that he will get barely any minutes, but I feel that he is a nice all around wing who could score efficiently. He also gives a nice veteran presence that the Sixers may need.