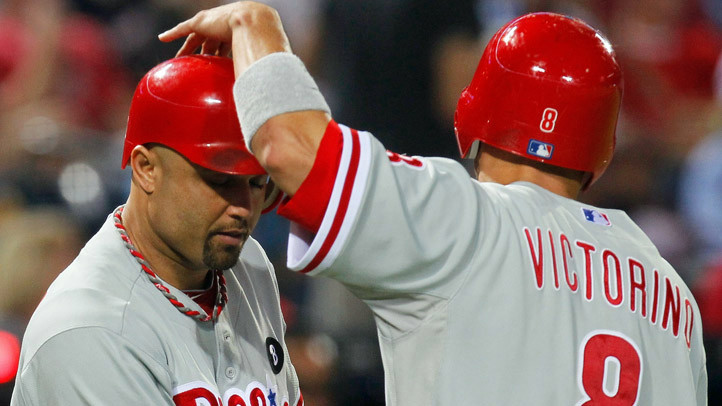 After taking over for Chase Utley in 2015, Hernandez had big shoes to fill. The switch hitting 2nd Baseman teamed up with his childhood friend Freddy Galvis to solidify the newly vacant middle infield. It is also worth noting that he served as a nice bridge piece until Scott Kingery was ready to play everyday in the infield. I expect him (Cesar) to do well in Cleveland.

All pitching jokes aside, Valdez played a crucial role on 2 of the best teams in franchise history (2010-2011). His versatility came in handy on numerous occasions, as he served as the primary backup to the likes of Rollins, Utley, and Polanco. He was the starting 3B in Doc’s post season No-Hitter against Cincinnati.

The “Flyin Hawaiian” played with more heart than almost anyone. He led by example both on and off the field. After being traded away from the team in 2012, Shane won a World Series with the Red Sox a year later in 2013, and he was a non-roster invite for the Cubs in spring training the year they broke the curse (2016). It appears Victorino has been a good luck charm everywhere he’s gone.

Polanco, a 3rd baseman in this article, had two different tenures with the team. The 2nd tenure (2010-2012) included a gold glove and two division titles. Polanco spent the remainder of his career with the Miami Marlins, where he reunited with former Phillies’ teammates Greg Dobbs and Juan Pierre.

“Chooch” was a fan favorite for a number of reasons. However, I still believe his value goes deeper than the box score. Ruiz handled the pitching staff wonderfully, and as he got older his leadership abilities were put on full display. There is a reason the Dodgers came calling when he became available for trade in August of 2016.